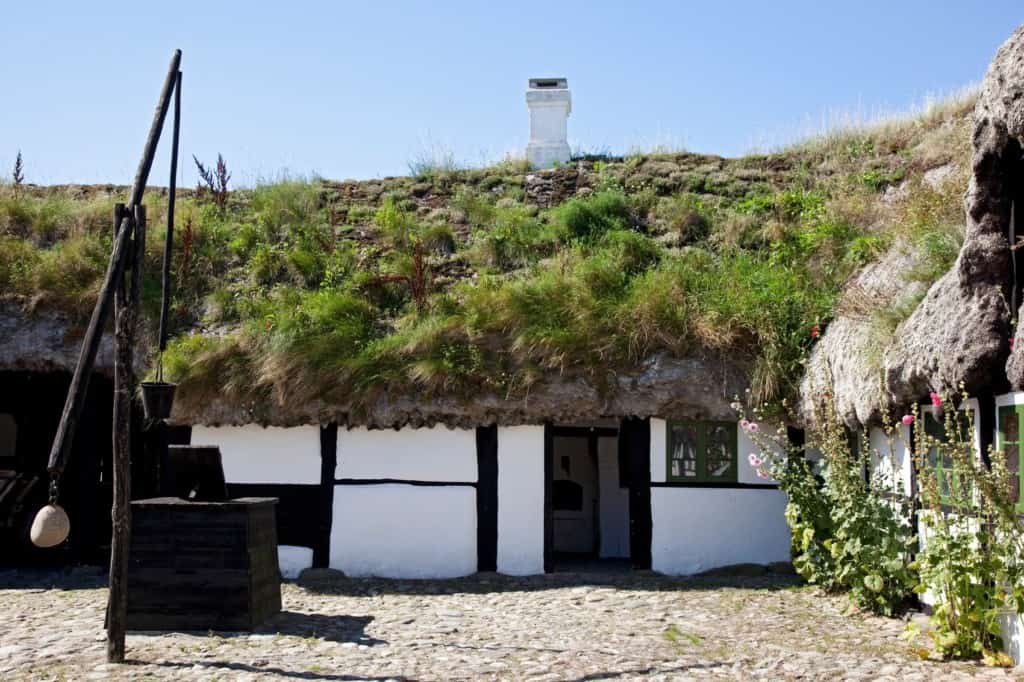 The Danish island of Læsø (also Laesoe or Vor Frue Land) is located in the northern Kattegat. It has only 1,897 inhabitants and is 101 km² in size. It is the most sparsely populated municipality in Denmark.

The best way to discover the sandy plains of the island of Läsö is to ride on the back of the island horses. Cycling around the island is also a good way to get to know Læsø. After the physical activity one has a healthy appetite for the fruits of the sea, not least for the langoustines. Enjoy relaxing salt baths in a converted historic church. Or take the fishing book out to sea to watch seals.

The roofs of the houses in Læsø are thatched with seaweed (a type of algae) that is dried and tied into tassels. A fresh wind always blows here, so that the seaweed flutters on the roofs, similar to disheveled hair. As the roofs get older, wild flowers grow on them. These roofs are listed.

Læsø: an unspoilt jewel in the Kattegat

When the weather is good – as it has been the last few days – there is nothing better than buying lots of new spring clothes and taking a short break here in Denmark. A vacation where you can really enjoy the sun, try out your new Ray-Bans and experience the beautiful nature of Denmark. And although Copenhagen is incredibly beautiful in the sunshine, there are hardly the most beautiful nature experiences here. Læsø, on the other hand, is a small, hidden gem.

Læsø is in the middle between Frederikshavn and Gothenburg. The largest island in the Kattegat with fewer than 2,000 inhabitants. And if you haven’t been to Læsø before, I can tell you that the island has many traditions and experiences, including its unique seaweed houses, centuries-old salt making techniques and delicious falling stars that you can all walk in the water in a picturesque setting of light, water , Experience sand and dunes. An obvious destination if you want to make the most of the beautiful Danish nature and newly purchased sunglasses. In addition, there is a tranquility here that you can probably only experience on an island like Læsø, where grocery stores close early and buses rarely run.

There are several ways to get to Læsø. Even if it seems a bit uncomfortable if you live in Copenhagen like me and don’t have a car.

Most take the ferry from Frederikshavn, which runs up to seven times a day in high season. The crossing takes about 90 minutes. You will then be dropped off at the port of Vesterø, a town in the north-west of Læsø.

If you get seasick easily or the transport to Frederikshavn is too long, you can fly from Copenhagen Airport in Roskilde instead. The airport on Læsø is located near Byrum in the middle of the island. On the other hand, there is no public transport to and from the airport other than taxis.

You have to live here

Of course, once you’ve managed to get to Læsø, you need to find a place to live where you can take full advantage of the island’s beautiful nature. I would therefore recommend that you stay in one of Læsø Strand’s holiday homes, which is less than 500 meters from Vesterø harbor, where the ferry will drop you off.

The holiday homes have a unique panoramic view of the sea, direct access to the dunes – you don’t get any closer to the water – and then exude this tranquility that permeates the entire island. While we lived here, I not only got the best night’s sleep, but also many beautiful moments with nature experiences, views and moods. For example, we spent most of the evenings in the armchairs of the holiday home with a glass of red wine in hand and a full view of the sky, which every evening is colored in all sorts of beautiful colors by the sunset over the Kattegat. We really enjoyed the life and the silence, ie. when the cameras didn’t just want to work overtime.

Læsø Strand is not the cheapest alternative. In return, you really get a luxurious break from everyday life.

You have to eat here

Læsø is known for its lobsters, which unfortunately we couldn’t try. However, I was told that the Carlsens Hotel in Vesterø harbor serves a delicious one of a kind with homemade dressing and lemon. MUMS!

It is not difficult for me to imagine this, as I have tried their almost equally famous shooting stars, which is certainly to be recommended. The Shooting Star can be bought in two sizes: the regular part and then the XL version, which must be big enough to kill a dead man. We were – as you can probably hear – satisfied with the slightly smaller part that is left 3 fried fish fillets and 1 cooked Læsø plaice fillet for 150 DKK. It was delicious!

The Carlsens Hotel generally offers traditional Danish cuisine, a cozy atmosphere and then the hotel is overlooking the water. If you don’t want to go home right after dinner, you can go to the bar next to the restaurant. Here you can have a cold beer and chat with the island’s locals.

You have to experience that

Go hiking and experience the island at your own pace

Only 5% of Læsø is built up – the rest is nature. So you almost have to be a skarn if you don’t go into the natural landscape. If you are looking for a clean and untouched nature, I can recommend you to move to the hilly dune plantation. The plantation is located in the northern part of the island and consists of deciduous, coniferous forest, dunes, lakes and moors. This is where you can really get out of your own mind while walking around on one of the many marked hiking trails. We packed a packed lunch and chose a route of 5 km. On the way we found a bench at the shelter where we could sit and enjoy the rye bread dishes that we had brought with the sun on our faces.

The beautiful coast of Læsø extends over 100 km, so you also have the opportunity to take a long and idyllic walk on the beach. And since you live right by the sea, it’s easy and tempting to go for a walk in the evening while the stars are reflected in the water.

Have you probably heard of Læsø Salt? But did you also know that the salt is made using old methods in a reconstructed southern hut?

In the Middle Ages, salt mining was the main source of income on Læsø, so it is far from a new phenomenon. What is special, however, is that the salt is still produced according to the old regulations. First they fetch the salty groundwater from wells on Rønnerne south of Læsø and pour the water into large iron pans hanging over a chimney. Then evaporate the water until the salt solution is saturated and the salt crystallizes. Finally, shovel it into large baskets where it drains before drying. And vupti, then you have the most expensive salt in the world.

The salt is coveted, of course, because it is made using these ancient sewing techniques, but also because it has a porous, easily soluble structure and a gentle taste of sea minerals.

You have to visit the museum because the salt shakers are incredibly good at telling you about the ancient processes in a lively and engaging way, while allowing you to get a little carried away by the atmosphere: the south of the water, the old beam constructions and the smoke out the fireplace.

Seaweed roofs that will last for hundreds of years

For a long time there was neither straw nor wood on Læsø. In return, they had a lot of seaweed and beach wood. The wood was therefore used as half-timbering in the houses, while the seaweed was used for roofs. In the 1900s, most of the roofs on Læsø were therefore clamped in place with pliers – today there are only 19 houses left.

The seaweed houses – as they are called – have been named one of the seven wonders of North Jutland and must be considered part of the island’s cultural heritage. I don’t necessarily want to call the result beautiful, but it is impressive to believe that they managed to build a roof with the resources that were once available to them, and that this roof would then last for several hundred years .

One of the remaining seaweed houses on the island is Læsø Uldstue, which has undergone a major renovation to preserve the unique seaweed roof. Uldgården is an atmospheric shop with a huge selection of wool products. They are known, among other things, for their wool duvet, which is supposed to ensure a restful sleep at a constant temperature – I think that at least doesn’t sound bad 🙂

In Læsø Uldstue you not only have the opportunity to shop for wool but you can also see the unique seaweed roof that cannot be found anywhere else in the world, learn how to sea a seaweed house and how the beach wood was used as a framework the old buildings.

Uldgården is some distance from the port of Vesterø, but it is possible to take the bus there. And the bus is almost an experience in itself. The bus drivers are at least incredibly helpful and talkative. We almost got a tour to and from the wool room and were driven straight to the door.

Although Læsø is characterized by the beautiful nature, I would still recommend you to take a walk past Læsø Kur. Who wouldn’t want to be pampered a little during the holidays?

Læsø Kur is the story of the modern Nordic spa in the old harbor church. The church was built in 1954 and served as a parish church until 2003 when the last service was held. When you came up with the idea of using leftover products from the island’s salt production for spa treatments, it was only natural to convert the empty space into a spa. You have received the church tower from which there is a very blissful atmosphere and an incredibly beautiful view.

The baths and treatments are based on the salt for which the island is so famous. You can e.g. Try their three different salt baths with a salt solution of 12% and 30% respectively. In the bath, where the salt solution is almost the same as the water in the Dead Sea, you can really feel the buoyancy of the salt water. In fact, the buoyancy is so great that it is almost difficult to stand on the ground. We also tried the 50-minute body peeling treatment, where you can choose between a salt or amber bowl. As a result, we took home from there as soft, oily baby buttocks.

All in all, a holiday on Læsø is a relaxing and peaceful holiday with the possibility of many experiences. You will leave feeling fresh and rested like never before. You could call this a real Danish holiday 🙂 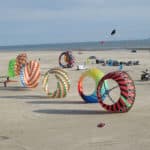